A guide to the different areas and micro-climates of Mauritius 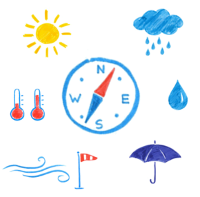 Choose wisely to get the most out of your holiday!

Many first-time tourist are just assuming it doesn't matter much where they stay in Mauritius because the island appears relatively small. It is however quite surprising how different the coasts of Mauritius actually are regarding infrastructure and climate. Most tourist would like to have as few rainy days as possible and not too much wind. Others prefer good diving/surfing/party spots or like to be off the beaten track. We put together a quick guide to give you some idea what area/coast might suit you best. If you want to deep-dive into the climate data and compare for yourself, you will also find interactive charts below.

Grand Baie is the main tourist spot in the north. A large shopping mall, night clubs, bars, and restaurants are attracting foreigners and locals on weekends.

Grand Baie itself has only small beaches, but only some kilometers away is Mont Choisy beach. With 5 km of white sandy beach, pine trees and sunloungers it's a must see if you're in the north.

On average the north has 5 more rainy days per month than the west coast. So if you're looking for a beach holiday keep this in mind. The average temperature is 2 °C less.

Tips:
Le Capitaine is a restaurant well known for its seafood. The Beach House is one of the few pubs directly at the beach with South-African cuisine and Happy Rajah has authentic Indian dishes. La Croisette is a nice shopping mall close to Grand Baie. It also houses the Food Lover's Market where you can get fresh BBQ meat and other more upscale produce. Banana Bar is often busy on the weekends with tourists and locals alike. They alternate between live music and DJs. Mystik is a hip new hotel near the Mont Choisy beach that also welcomes outside guest for food&drinks.

Flic en Flac and Tamarin are the largest settlements in the west with many expats and affluent locals living there. This situation leads to a good infrastructure: big supermarkets with fresh seafood, fish and meat, fruits and vegetables as well as good restaurants attract tourists and locals. Even some nightclubs can be found on the West Coast. The West coast has most hours of sunshine and very little rain. Flic en Flac has a long white sandy beach with sun loungers and pine trees. Due to the reef there are almost no waves and shallow water. Across the beach road you can find many restaurants and some nightlife.

Surfers are more attracted to Tamarin, as the bay of Tamarin does not have a reef. During Mauritian winter time (June-August), the surfing conditions are very good with high waves.

Tips:
Enjoy an evening of live music in the garden of Kenzi Bar (Flic en Flac) every Sunday. Party-people should check Shotz (Flic en Flac), Lakaz (Flic en Flac/Cascavelle), and Big Willy's (Tamarin). Families will enjoy a visit to Casela Nature Park. Get up early to see the dolphins and have a BBQ on Île aux Benitiers, but be sure to pick a company that is committed to protect the dolphins. Seastar Hotel is a new boutique hotel in Flic en Flac with an excellent restaurant with a focus on local fish.

Like on the East coast most holiday makers stay in a hotel and book at least half-board. Grocery shopping is a bit challenging here as fresh produce and BBQ meat are hard to come by. Keep in mind that driving from the South to the North takes at least 1.5 hours per way.

Unfortunately it's more cloudy in the south and like on the east coast big hotels line up on the beach.

Nevertheless, there are lots of things to do here, especially for nature lovers. Attractions nearby are the Grand Bassin with the huge statue of Shiva. It's the most important spiritual hindu place outside of India. Kite surfers usually go to Le Morne. One eye is a popular kite-surfing spot.

Tips:
The Vanilla Crocodila Park and Gris Gris are nature spectacles. Go ziplining over the Mauritian jungle. Hike the and learn about its troubled history. Macondee is a very instagrammable view point one the way from Le Morne to Bel Ombre. Maybe skip the Seven Coloured Earths as many tourist are underwhelmed by them.

The east coast has less inhabitants and tourists and therefore the infrastructure with restaurants and shops is not as good as in the north and the west. It can be hard to find good non-frozen meat for example.

With much more wind, the beaches are more empty and usually people tend to stay in big hotels to rather enjoy the pool and hotel infrastructure. For diving enthusiasts, there are some good spots for drift-diving here.

Year-around there are less sun hours, sometimes 3 hours less per day more rain than in the north/west.

Tips:
Île aux Cerfs is a must see in the east. There are many companies offering fully catered day cruises with live-music. These cruises also often pass by the Grand River South East (GRSE) waterfall. Be sure to read the companies' reviews as the quality of the food, drinks, and entertainment varies.

Most Mauritians live in the center around Curepipe. Historically due to the hot weather on the coasts people moved to the Highlands. For the last 30 years, affluent locals have begun move back to the coast and enjoy the luxury of good weather outside and airconditioned rooms inside. While exploring the island you'll recognise that the center is always lush and green and it's raining at least once per day on average.

It's often colder and we recommend to take a long sleeve with you when hiking. The humidity is often very high and during summer (December to February) almost unbearable.

Tips:
If you want to do something off the beaten track, visit Tavern Petit Marie. Only locals usually come here to enjoy cornfish and a glass of rum. Be prepared, they might just put a whole bottle of rum and Sprite in front of you.

What's best for you? 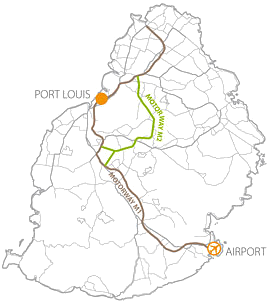 It is important to note that the road network in Mauritius is not uniformly developed and travel times can be much higher than expected if you get off the main highway which goes from the north to the mid-west, through the center, onto the airport. Unless you have booked a hotel with full-board/all-inclusive and don't need to see much more than your hotel, a rental car is pretty much a must; the main attractions are spread out around the island with a heavy weight on the south of the island. Unless you stay in Flic en Flac or Grand Baie, you would also need a car to diversify your shopping and dining options. Our recommendation: If you want to stay in a convenient spot and also visit the main attractions of the island, we think the west is the best spot to be in. Read more about driving in Mauritius

You may cancel your booking free of charge:

Furthermore, as usual you may cancel your booking free of charge up to 48 hours before.

Since October 2021, vaccinated and PCR-tested arrivals may enter Mauritius without quarantine and may roam freely from day one.